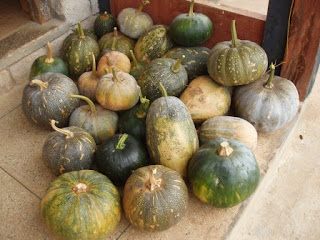 Halloween is by far my favorite holiday and being far from home on such a day can sometimes be a bit hard to bear. Well, this year I’ve been reveling in Halloween. I approached my principal with a professionally typed request for permission to conduct some Halloween festivities. Being in a predominantly Buddhist country, and one so removed from Western culture, Halloween is completely unknown to the majority of Bhutanese. This is amazing for two reasons: 1) I get to share the coolest holiday ever with my students and share my own culture with them. 2) I can practically do whatever I want and it’s accepted as “Halloween”. I’m pretty sure I could have said that we wear our clothes inside out and eat pink flowers and it would have been accepted as part of my culture. Luckily for Samtengang, I’m not a jackass and their flowers were saved. Instead, I proposed two small activities.
On Saturday, my students scavenged for curtains and a bed sheet so that I could show them a scary movie. I bought them all tons of candy and shared what the holiday was and what it meant to me. They were very excited when they realized kids in the U.S. were doing similar things at that very moment. I showed them “The Mummy” with Brendan Frasier thinking it’s appropriate and not too scary should some kids be scaredy-cats. Well, my students thoroughly enjoyed it, but were soon asking me to show them “Saw”. I was shocked by their desire for such a gory and disturbing movie, but also slightly bonded closer to them seeing clearly that they also had an affinity for horror movies. Oh class 8B. 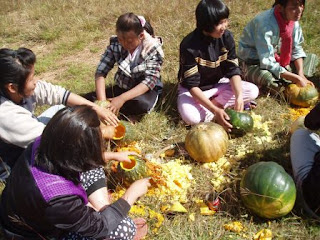 The next day, Sunday, I shocked the village by purchasing 30 pumpkins. Since no one knew that pumpkins are carved on Halloween for decoration, they all thought I had some strange foodie fetish. The amount of strange looks was rather hilarious. I told them that all would be revealed shortly and not to worry about their soon-to-be-sacrificed pumpkins. Students had to show up at 9:50am to pick up the pumpkins to carry them to the ‘carving grounds’. I told them to hold on while I brushed my teeth and quickly reappeared in costume, The Pumpkin King! I made myself a black and orange crown with a pumpkin emblem on the front, had an orange towel as my cape, a red sash that held my sword (trekking pole), and a pumpkin staff made from a broom stick and cardboard pumpkins. Kids. Were. Blown. Away. Essentially I looked crazy to them but they all ran around and called themselves my ministers, bodyguards, and secretaries. It was amazingly adorable actually. The whole day I called them my “pumpkinlings” and kept directing them around with a wave of my staff or a hand on my sword. They kept saying that I must have had to kill a lot of pumpkins to become the king; I told them it was too gruesome to discuss and shed a soft tear. My students, somehow, are not amateur pumpkin carvers – they were great at it! They had tons of fun and were very excited about our upcoming ‘lighting ceremony’ at dinner. 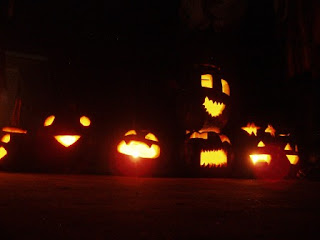 Dinner time became Harry Potter-esque with lit pumpkins on display for the whole school. We lined the 30 odd pumpkins up, some stacked 3 high, and let the school enjoy. Other students were running and lining up to see the spectacle. My students were so attached that despite continually telling them to go get dinner, they refused and stayed with their jack-o-lanterns. Needless to say, Halloween is alive and well here in Samtengang.
All hail the Pumpkin King!
Carson 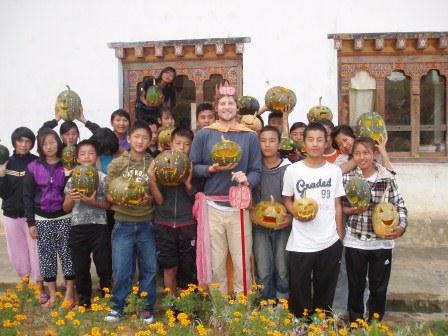 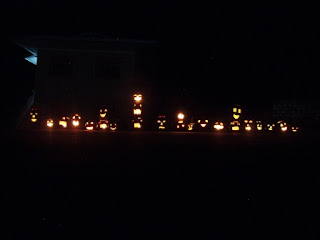 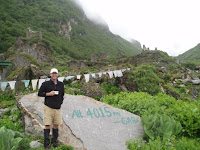 Carson Koller
Through the support of the Bhutan Canada Foundation, I am taking a post at Samtengang Middle Secondary School to teach English to grades 7-9. I earned a B.A. in Classics and History from the University of Puget Sound. After graduation in 2007, I traveled to Uganda and spent most of 2008 teaching sexual reproductive health in a rural village. Upon my return, I worked toward and, to my pleasant surprise, was awarded a M.Ed. in Secondary Education from Boston College. In an effort to be closer to family and trees, I moved to Seattle, Washington where I taught English, history, and math at Dartmoor School for the year prior to moving to Bhutan. I love backpacking, hiking, and the outdoors.

What is the Bhutan Canada Foundation?

The Bhutan Canada Foundation works hand in hand with Bhutan's Ministry of Education to bolster educational outcomes throughout the country. The main focus of the BCF is teacher recruitment. Each year, BCF recruits native English speakers with strong educational backgrounds to "support and promote the aims of the Bhutanese Ministry of Education in its pursuit of excellence in education." In addition, the BCF also contributes through donations of supplies as well as a scholarship program that allows Bhutanese students to study in Canadian institutions. The BCF is a registered Canadian charity.